You may be familiar with the story of King George VI, whose struggle with stuttering inspired the movie The King’s Speech. Did you know that there is a long, star-studded list of people who have stuttered at some time in their life? The Stuttering Foundation claims that these people had a stutter: Marilyn Munroe, Sam Neill, Nicole Kidman, Winston Churchill, Charlie Sheen, Bruce Willis, Charles Darwin, Andrew Lloyd Webber and Lewis Carroll.

It is estimated that stuttering affects approximately 0.72% of people across all ages. The number is higher in children, with approximately 1.6% of children aged 3-17 years. 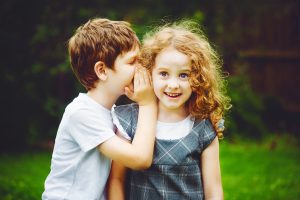 Stuttering is a disorder of the flow or fluency of speech. Someone who stutters may:

Stuttering is a physical disorder. While it may become worse during times of stress, it is not caused by psychological factors such as stress or parenting practices. It can run in families. There is much that we still need to learn about the cause of stuttering, but we think it is probably caused by abnormal speech processing in the brain.

Can stuttering be cured?

The Lidcombe Program (LP) for stuttering has been shown to be very effective in treating stuttering in preschooler and children in early primary school. The LP originated in Lidcombe, Sydney, out of the Australian Stuttering Research Centre (ASRC), which is attached to the University of Sydney. It is a behavioural treatment, in which parents learn to respond consistently to their child’s stuttered and stutter-free speech. The program can be delivered by a qualified Speech Pathologist either face-to-face or via webcam on the internet.

The Camperdown Program (CP), which also originated at the ASRC, is a very effective program for adults with persistent stuttering. Treatment involves learning to use a slightly different, but natural-sounding speech pattern. The CP does not cure stuttering. Treatment is delivered by a specially-trained Speech Pathologist, either face-to-face or via webcam on the internet.

The LP and the CP have very high success rates and have been shown to be effective in independent, randomised control trials (ie. they have very high levels of evidence). The LP and CP are now practised throughout the world.

Should I get help?

If you or your loved one is stuttering, a Speech Pathologist can help you. Because the LP is so effective in treating stuttering in early childhood, it is very important to seek help in the first 12 months of stuttering. Adults, too, can benefit greatly from therapy.

Signs of Breathing Problems #1: Is Your Child’s Mouth Open?

What does lisp, bedwetting and attention/behaviour problems have in common?

Is Your Child Ready for School?